Calculating worm gear forces is necessary to determine bearing reactions and shaft loads.  Because of the sliding action between the worm and gear, friction plays a major role in a worm gear set's efficiency.

For this discussion, we assume the worm and gear shafts are 90 degrees apart and that the worm is driving the gear.

The diagram below shows the worm gear forces that need to be determined in order to analyze shaft and bearing loads. 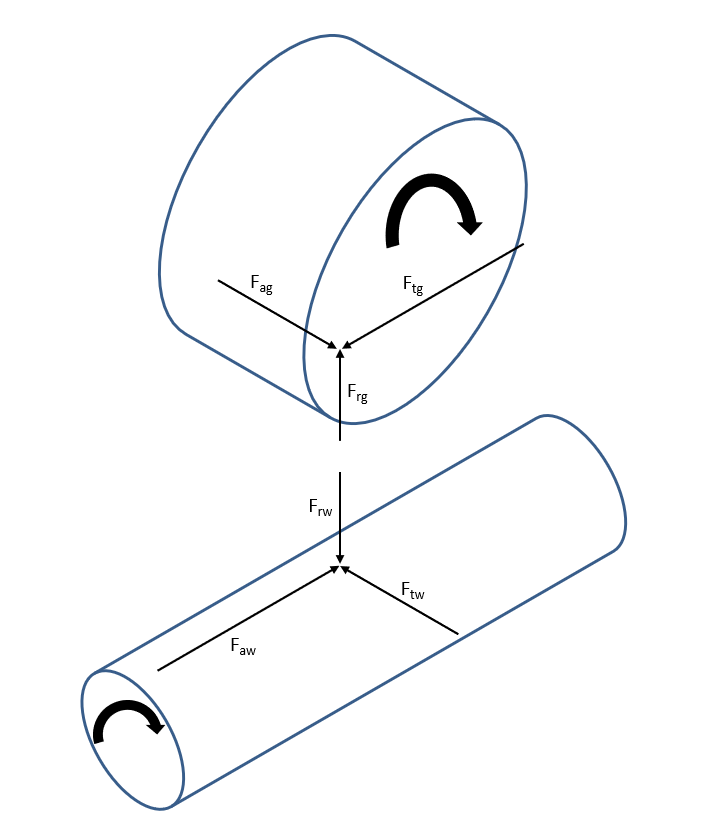 For shafts at 90 degrees:

When a worm and gear mesh, there are two forces present.  The normal force, Fn is the force normal to the worm (and gear) tooth.  There is also a friction force, Ff due to the sliding action of the worm against the gear.

The diagram below shows the forces on the worm.  Fn is also decomposed into its x, y, and z components which helps to determine tangential, radial, and axial forces later.

λ is the worm lead angle.  Φn is the normal pressure angle. 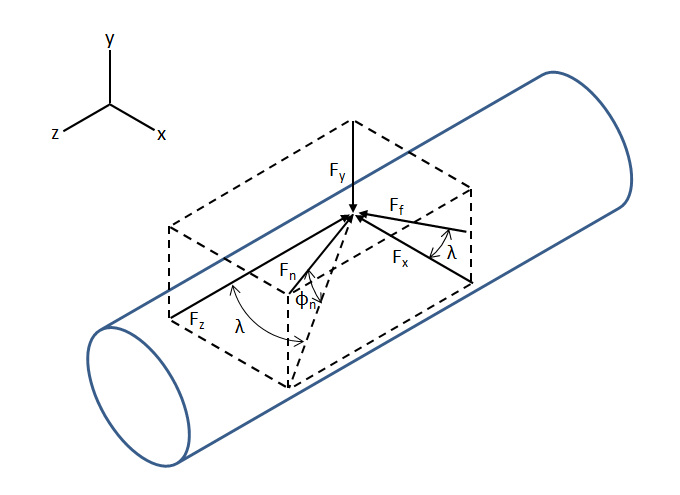 The normal force, Fn is decomposed by the following equations:

The friction force, Ff acts in the x-z plane.  It is decomposed into x and z components by the following:

Where μ is the coefficient of friction.

Now that we've got the forces from the gear mesh, we can calculate tangential, radial, and axial forces which are necessary to determine shaft and bearing loads.  To start we either have to assume an input torque to the worm or an output torque from the gear.

We will assume we know the input torque, and the worm tangential force is determined by:

Where Ti is input torque, and rpw is the pitch radius of the worm.  NOTE: Appropriate unit conversion must also be incorporated.

The worm axial force is given by:

Solving equation 1 for Fn and substituting into equation 2:

The gear output torque is:

Where To is output torque, and rpg is the pitch radius of the gear.  NOTE: Appropriate unit conversion must also be incorporated.

The worm radial force is given by:

Solving equation 1 for Fn and substituting into equation 3: