Before we get into details, let's look at the big picture for a minute.  A parametric probability distribution is a mathematical function whose shape is governed by parameters.  For example, the normal distribution has two parameters: mean and standard deviation.

On the other hand, an empirical distribution is not based on a mathematical function.  It is based on data itself.

When we build a model to simulate, some of the inputs are random variables (otherwise we wouldn't be simulating).  If a parametric distribution is used to represent a variable, we do one of two things.  Either we come up with the parameters through "expert" estimates, or by fitting a distribution to data and estimating the parameters.

There are advantages and disadvantages to both methods, so using an empirical distribution every time there is data may not make sense as we'll see later.

Where N is the total number of data points.

Let's say we have the following data that has been sorted from lowest to highest.  The data set is small for illustrative purposes.

The empirical distribution of this data is plotted below.  Note how cumulative probability steps up at each new unique value.  The more data points at a unique value, the bigger the step.  Also notice how each vertical line corresponds to a unique value in the data. 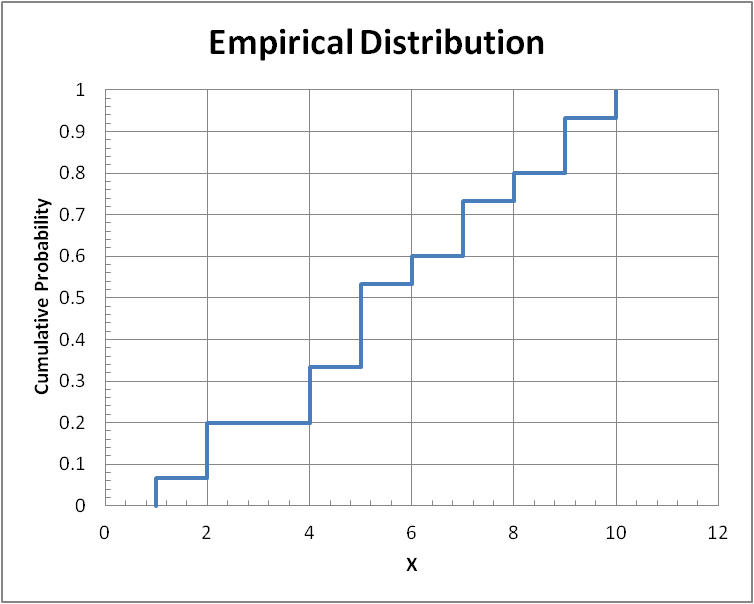 Sampling from a distribution comes in two flavors: discrete and continuous.

On the other hand, if the variable can assume any value between the minimum and maximum data points, the variable is continuous.  In this case we need to do a little extra work to sample.

Discrete sampling is relatively straightforward.  We simply find the random number value on the vertical axis and go to the right until intersecting the distribution curve.  Then go down to the horizontal axis and record the value.  The value is the sample.

In the example below, we generated a random number of 0.44.  The sample value is 5. 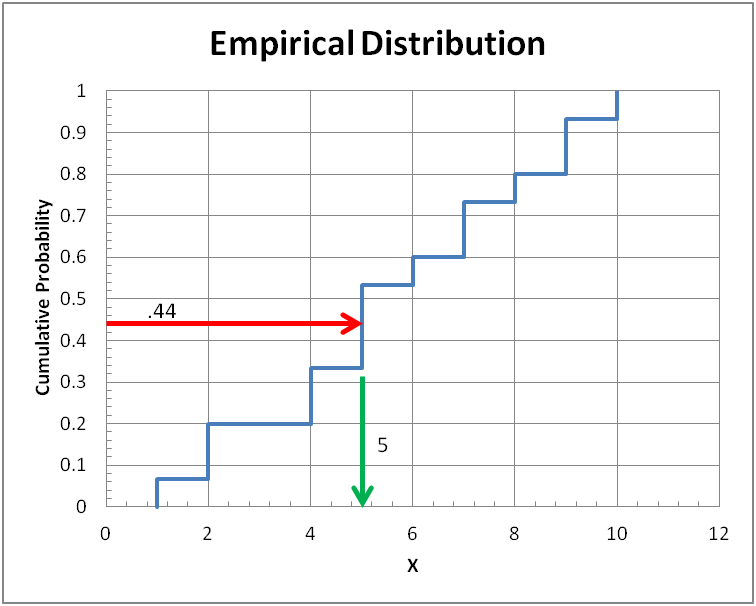 Continuous sampling is a little more complicated since we need to interpolate between data points.  One way to do this is to use percentiles. To do this, we calculate the value at a given percentile.  The random number is the percentile, as a fraction of 1.  The chart below has the original empirical distribution as well as the interpolated values calculated as percentiles.

Notice how data values with more than one instance will return that value exactly for some range of probability (vertical lines).  For example, if the random number is .3752 to .5, the sample will be exactly 5.

In the example, let's say we generate a random number of 0.77.  Moving to the right until we intersect the green line, and then going down to the horizontal axis we get a sample value of 7.78. 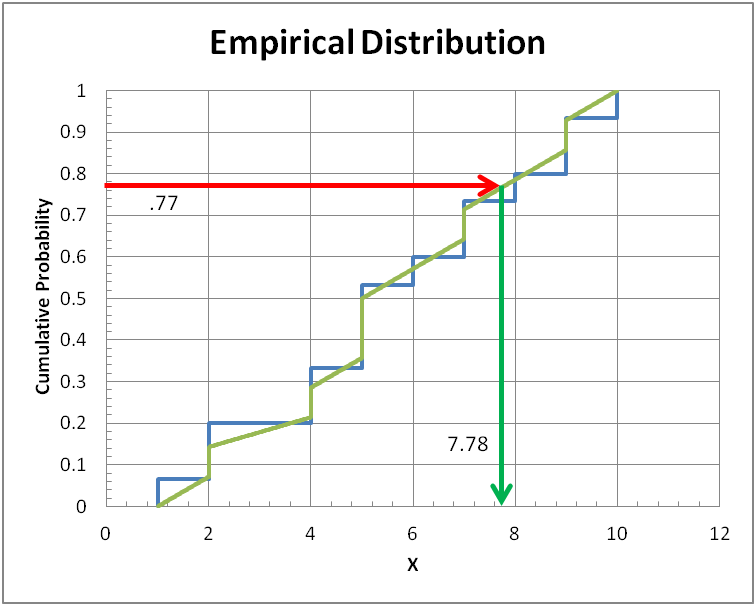 Simulation Master is an Excel® add-in for Monte Carlo simulation.  It allows for empirical sampling with the RVEMPIRICAL function.  Each time the spreadsheet is calculated, the function samples from the data and returns a new value.

The data range must conform to the following:

Discrete will return only values included in the data range. Continuous uses interpolation to return values between data points. The Excel PERCENTILE.INC function is used to generate the continuous values.

The function must evaluate to a numeric value or an error will result.

Using empirical data instead of a parametric random variable function has some limitations: