A decision tree is constructed as a one-to-many relationship where a node can have one or more children, but can only have one parent.  Decision trees are comprised of nodes that can be one of three types:

Decision Node  A decision node is represented by a square and denotes a decision to be made.

Chance Node  A chance node is represented by a circle and denotes outcomes from the node that happen by chance.  Each outcome has an associated probability of occurrence.

End Node  An end node is represented by a triangle and denotes the outcome of a path through the decision tree. 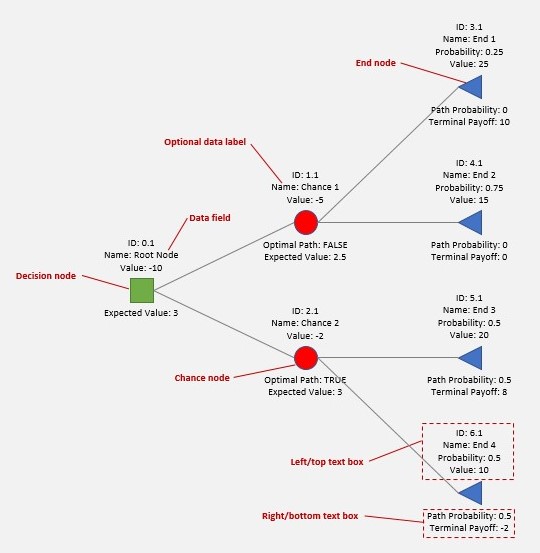 The right/bottom text box shows calculated values.  It can be shown on the bottom or to the right of the node.

Node name is a descriptive name of the node entered by the user.

If a node’s parent is a chance node, then the probability of this node’s occurrence is shown.  Probability is entered by the user.

Value is the cash flow (or other value) that occurs at each node.  For example, if there is an initial investment of 10 at the root node, the root node’s value would be either 10 or -10 depending on your cash flow sign convention.  It’s important to be consistent with signs when entering values, such as cash outflow is negative and cash inflow is positive.  Value is entered by the user.

When a tree is rolled back, one of the following three values are calculated depending on settings:

These values are shown on decision and chance nodes.

The sum of values along the path from the root node to each end node is that end node’s terminal payoff.  This is the net payoff for each end node and is used for rollback calculations.

If exponential utility, certainty equivalent, or a custom utility function is used, the terminal payoff for each end node will be converted to a utility called terminal utility.  This value will be used for rollback instead of terminal payoff.

The following node data fields can get their values from cells in the workbook containing the diagram:

These data field values can be driven by the cells they reference.  Referenced cells are also used when performing Monte Carlo simulation of a decision tree.

Referenced cells cannot be sorted.  Sorting data, for example table data, will change what is shown in each node.  Cell references will show what is in a given cell address.  Sorting will change these values and destroy data relationship integrity. 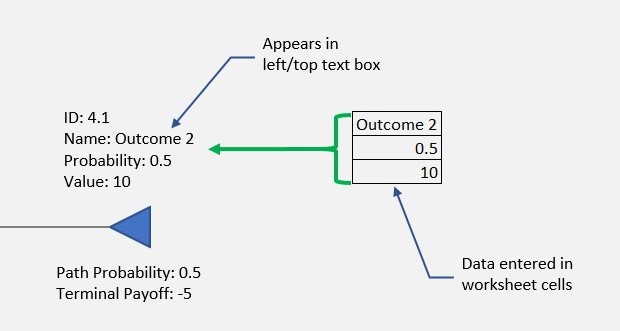 Tree settings, node data, cell references, and connector data are stored within the worksheet containing a decision tree.  This data is contained in columns A through Z and will be hidden when a new tree is created.  These columns are protected to maintain data integrity.

The visible portion of the tree worksheet can be modified as normal, except for the following:

Node data in a decision tree can be extracted to either a new worksheet or a new workbook by creating a node report.  The report will show all user entered node data including incoming and outgoing connections.

Expected monetary value is used in a risk-neutral situation.  In this case, the goal is to either maximize or minimize expected value.  This is often the case when a project being evaluated is small relative to the overall organization and a project failure would not endanger its ongoing viability.

DTace allows for the certainty equivalent from exponential utility to be calculated.

There are two possible decision rules in DTace:

Expected value of a chance node is based on the sum of each child node probability multiplied by value.

During a roll back, starting at the end nodes, the expected values of node parents are calculated until the root node is reached.  Assuming we want to maximize expected value, we would use the choose maximum decision rule.  The roll back calculation procedure for the example decision tree is shown below.

Below is a plot of exponential utility vs. payoff.  As R decreases, we are more risk-averse based on the concave shape of the curve.  In other words, there is a bigger penalty in utility for lower payoffs. 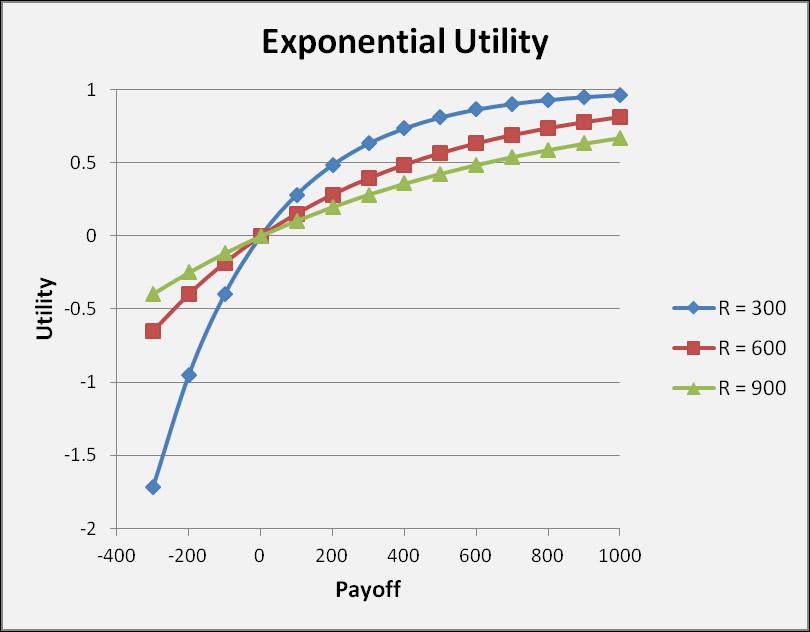 This concludes the tutorial on decision tree basics.  For more tutorials, go to DTace tutorials.