Your strategy in a picture

DTace is an add-in that allows you to create and analyze decision trees in Excel.  You can develop a detailed plan, and understand the potential risks and opportunities of your situation.

When used in conjunction with Simulation Master, you can replace discrete outcomes with a probability distribution and use Monte Carlo simulation to get a more complete risk profile.

DTace features a simple form based user interface.  It also allows for easy sharing since it resides within the Excel environment. 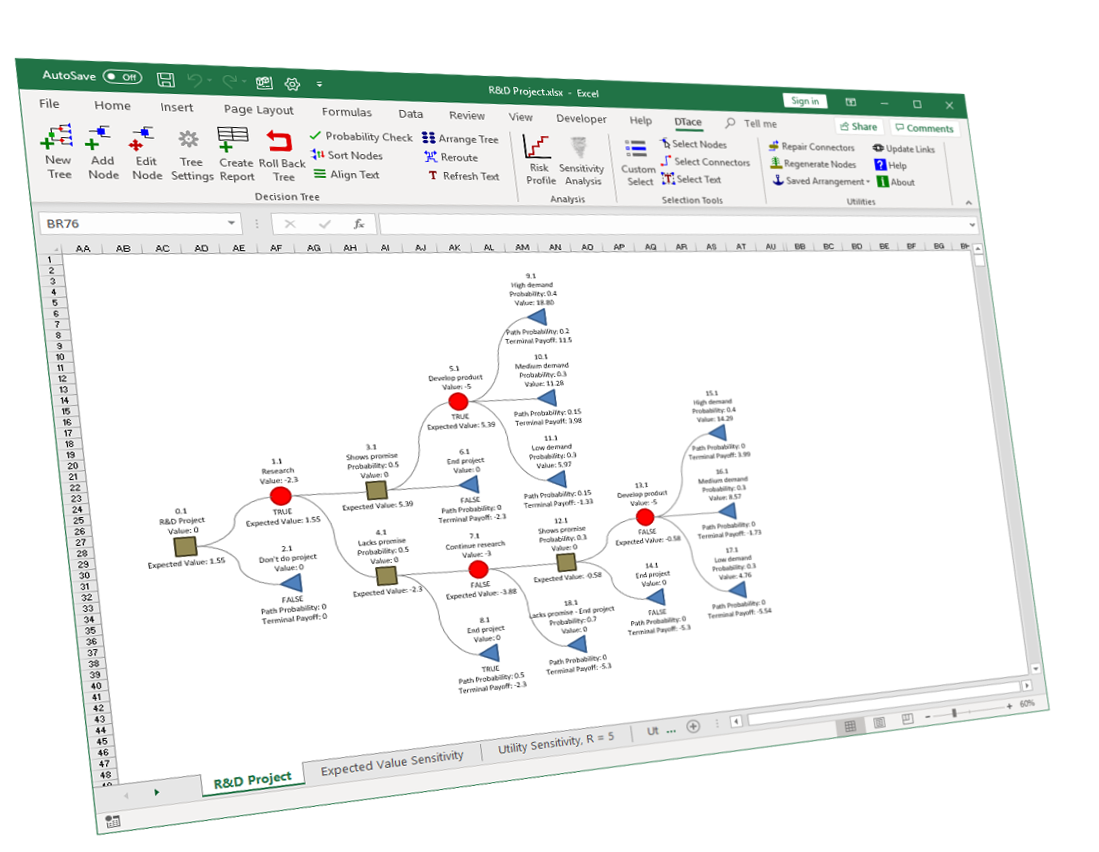 DTace runs 100% inside Excel in an environment with which you are already comfortable.  All tree elements, reports and charts are Excel native objects allowing you to edit them for communication with colleagues.

"When combined with Simulation Master, you can use Monte Carlo simulation with your decision tree."

Building and Analyzing a Decision Tree

Create a New Tree  DTace creates a new worksheet that is formatted for a DTace decision tree.

Add Nodes  Add nodes to the decision tree by using the add node form.  Depending on the node type, a node name, probability and value is entered.  You can easily edit nodes later.  There are three node types: decision, chance, and end nodes.

Roll Back  Once the decision tree nodes have been added, roll back the tree to calculate the expected monetary value, expected utility or certainty equivalent of the root node.  Using the "choose maximum" or "choose minimum" decision rules, you can rollback so the maximum value or minimum value is chosen at each decision node.

Sensitivity Analysis  DTace has a sensitivity analysis tool to vary payoffs and probabilities to find what factors have the most impact on expected value or utility.  You set the amount of change as a percentage of the base case values, and the software automatically generates a tornado chart showing sensitivity.  All reports and charts are native to Excel so you can easily change formatting to meet your needs.

Explore the features of DTace in detail.

Try it for Free

If you don't see it, check your downloads folder.

Excel for Mac not supported at this time.

Visit the Vortarus Knowledge Base for tutorials, example workbooks, and general information.